7 Unexpected Flavor Profiles to Warm Up the Season 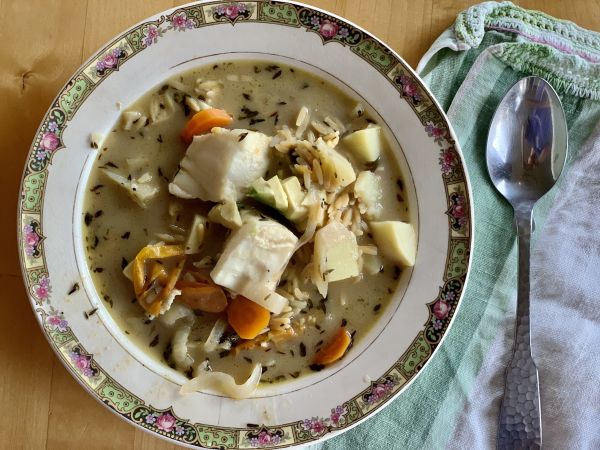 Take a break from run-of-the-mill chowders by exploring unexpected flavor profiles in your seafood soups this season.

Whether you’re craving a globally-inspired ingredient list or looking for a modern take on a classic, wild-caught Alaskan seafood will be an integral component of many of the best seafood soup recipes out there; its versatility and freshness make it the perfect protein to use through the chillier months of the year. Pollock quick cuts are always a good option, as they’re practically ready to go right from the package, while something like spot prawns can be used as a one-two punch of flavor if you have some extra time to make a batch of prawn stock.

Here are 7 seafood soup recipes that you’ll want to cozy up to as the temperature drops:

A modern take on Thai, this ginger-coconut fish soup from The Washington Post integrates sweet potatoes and zucchini into its base along with the addition of Chinese five spice powder to produce a colorful, complexly flavored meal. While the recipe calls for white fish, there’s no reason why you couldn’t try making this with chunks of skinless salmon instead; its richer taste will perfectly complement everything you have going on in the pot.

Matzo ball soup gets a pescatarian twist in Food Republic’s recipe, which uses fish stock rather than chicken stock as its base. That has us thinking about adapting this soup to feature sweet, succulent spot prawns: You could easily substitute prawn stock simmered with all of the fixings that are written into the original recipe — it won’t certainly won’t be kosher that way, but it’ll be delicious. And for a final flourish, toss prawns into the pot at the end to poach in the finished broth.

Spicy, sweet gochujang and white fish come together in this Korean-inspired recipe for a seafood stew from Serious Eats. An anchovy stock brings serious umami to the broth — feel free to use dashi, instead — while firm tofu and mushrooms give it heft, making it a savory, satisfying, low-carb meal to hibernate with all winter.

A quick, light broth of green tea, basil, honey, ginger, and soy form an unexpected union of flavors for this recipe from Martha Stewart Living. It’s the perfect setting for a simply cooked fillet of meaty, mild halibut; while the recipe directs you to sear the fish before finishing it in the oven, you can simplify things by cooking the halibut on the stovetop until the internal temperature reaches 130 degrees.

Andrea Nguyen’s recipe for fish soup uses pineapple to flavor the broth, as well as classic elements of Vietnamese cuisine like fish sauce and tamarind, producing a salty-sweet-sour broth that comes together practically instantly: It needs just over 10 minutes to transform a pot of water into a high-flavor soup. Traditionally, you’d make this with a regional Vietnamese catch like catfish, but any white fish will do. Try making this recipe with a couple packs of pollock quick cuts or even rockfish, instead.

A tart and spicy yuzu kosho, matched up with Southeast Asian ingredients like ginger and lemongrass, all work together to bring unique aromatics to this mixed seafood soup from Saveur. Yuzu, if you aren’t familiar with it, is a Japanese citrus fruit whose flavor profile can’t be replaced with other citruses, so there’s not an easy substitute for it; you’ll likely need to find a bottle of the yuzu kosho at a specialty market to get the most out of this recipe.

This shrimp-infused noodle soup from Bon Appetit is an insane mashup of spices from all over the map — star anise, cinnamon, cardamom, clove, chile de arbol. And then there’s the highly-aromatic shrimp and cashew paste you’ll stir into the broth upon serving the dish. Making this recipe is a whole production compared to other easy seafood soup recipes, but it’s worth the effort when you want to treat your taste buds to a flavor explosion of comfort food.