Move Over, Sushi: These Japanese Cooking Styles Will Make Your Wild-Caught Seafood Shine 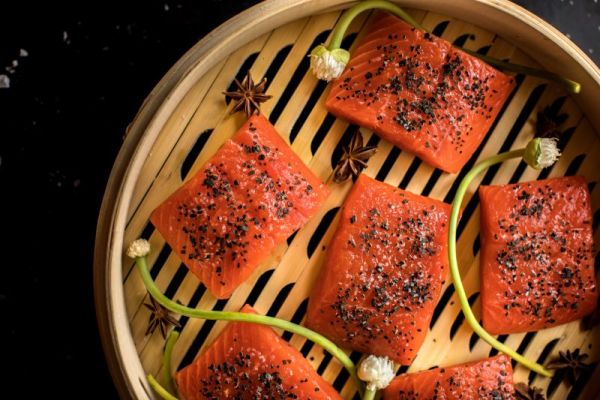 As an island nation with a long history of fishing, Japan also has one of the most unique culinary heritages around seafood, including its signature raw tradition of sushi and sashimi. While less global in reach, Japanese traditions of cooked seafood have also been perfected over the years to make your wild-caught seafood shine. Fun fact: teri (as in teriyaki) literally means shiny. Keep that one in your back pocket for trivia night.

Traditional Japanese cooking methods are organized into four categories: agemono, yakimono, mushimono, and nimono. You might not be familiar with each of these methods by name, but you likely have enjoyed seafood prepared in each of these styles without understanding exactly why these cooking methods work so well, including a classic like teriyaki. Each of these four styles of cooking has its place in Japanese cuisine, and particular approaches within each of those categories can be used to enhance the flavor and texture of wild-caught seafood.

Whether you’re craving seafood that’s been fried, grilled, steamed, or poached, there’s a Japanese cooking style that will match your mood.

The two fried Japanese methods of agemono that you’ll want to use with wild-caught seafood are tempura and katsu.

Tempura batter, made with a combination of flour and cornstarch, creates a delicate halo of a crust on seafood that is light and crispy. Because it fries up quickly — usually within two minutes of frying — you’ll want to use thinner cuts of fish so that your protein is sufficiently cooked by the time the tempura is golden. Captain’s Cuts of salmon tend to be thinner than regular cuts, and this makes tempura-ready, straight from the packaging. Using Wild Alaska Pollock Quick Cuts can save you time as well, and will produce something like tempura fish nuggets. When using cod, halibut, or rockfish, cut the fillets down into 2-inch pieces.

For an all-purpose tempura batter to play around with, use this recipe from Dorie Greenspan. Or, follow along with this recipe for tempura halibut from The Spruce Eats. For ambitious tempura lovers, Food Network’s recipe for a fried salmon roll will get you that gauzy, crisp exterior that contrasts so nicely with sushi.

A heftier fried style of Japanese cuisine is katsu, which is a technique that you can use to fry your fish in panko breadcrumbs, which will give you an extra crispy, substantial crust on your seafood. A katsu crust can be used with any fish, since the panko takes a few extra minutes to fry; thicker fillets can be fried first then finished in the oven.

The Staff Canteen has a recipe for salmon katsu, but you can basically just follow any recipe for fish breaded in panko and serve with a tonkatsu sauce like this simple homemade one from Pickled Plum.

When it comes to yakimono, there are two main approaches that come to mind for wild-caught seafood: yakitori and teriyaki.

With yakitori, you have your pick of grilled proteins and veggies, threaded onto skewers that hold just enough to let you try a little bit of everything. Grilled over a special charcoal setup, yakitori-grilled foods tend to pick up a particularly nice char. But even if you don’t own a yakitori grill, you can recreate the experience with the right flavors and, of course, small skewers to get the portions right.

Another charred favorite is teriyaki. Doing teriyaki right means you’ll be making your own teriyaki sauce — it’s super easy — to brush onto your fish several times throughout the cooking process on the grill or under a broiler, allowing the layers of sauce to build into caramelized lacquer by the time the fish is cooked, giving you that sticky, practically candy-coated glaze that makes this preparation an all-around favorite.

Yet another recipe from Food and Wine, this one is for teriyaki cod but could be made with salmon or halibut instead. Andrew Zimmern adapts the yaki technique for the stovetop with a fillet of halibut, charring it in a pan over high heat before cooking it through in a teriyaki-style reduction.

Essentially, mushimono is a steamed dish. What works best with seafood is sakamushi, which uses sake as its steaming liquid to heighten the aromatic qualities of whatever you’re cooking.

Epicurious’s recipe for steamed halibut uses an entire 750ml bottle of sake, along with a few aromatics, to make enough broth to cook up four servings of fish. Buttered carrots are added at the end for a bit of richness. Tom Douglas’s recipe for sake-steamed salmon also benefits from a bit of butter, in the form of a rich sake butter; it’s definitely more Asian fusion than Japanese, but you’ll still get that distinct flavor profile that comes with whatever sake you’ve used to make this dish.

Dashi, sake, and soy are the foundation of nimono-style dishes, used to simmer or poach a variety of ingredients while infusing them with flavor. Yosenabe, aka Japanese hot pot, is a one-pot nimono approach that works nicely with seafood. Though you might not own an actual nabe, the clay pot that’s traditionally used for this dish, you can improvise by using a dutch oven or cast-iron pot, since they can hold residual heat longer than a metal one.

Before you try your hand at any yosenabe recipes, you’ll want to know how to make dashi from kombu and bonito flakes. The Kitchn has a thorough guide making an impeccable dashi. From there, you can try Serious Eats’s recipe for a yosenabe made with salmon; made with potatoes, it’s almost like Japanese-style fish chowder. For something more streamlined, check out Bon Appetit’s recipe for a salmon or sablefish yosenabe, cooked in a ginger-infused broth.