A Quick Breakdown of the Species' Nuances 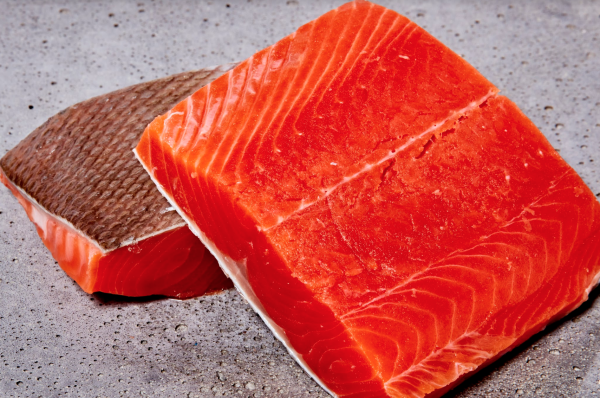 Filets of sockeye and coho salmon, two popular types of wild Alaskan salmon, are both that unmistakable shade of red-pink. They’re both healthy, clean sources of protein with nutritional benefits you can’t easily find elsewhere. And perhaps most importantly, they’re both delicious.

But with all that they share in common, wild Alaskan sockeye and coho salmon have some key differences that we think you will want to understand when you’re choosing between which species of salmon you’ll be making for your next meal.

Here are the key differences between sockeye and coho salmon that we think you need to know:

Sockeye, otherwise known as red salmon, earned this colorful nickname because its flesh is a vibrant, saturated red. This makes it the most photogenic of salmon, from a food photographer’s standpoint! It’s distinctive color also makes it the easiest to identify, if you’re new to salmon or new to identifying fish fillets in general: When you see a fillet of richly-hued fish, you can bet your money that it is a fillet of wild sockeye.

Coho are called silver salmon because of their radiant, silvery skin; it’s perhaps not obvious when you’re looking at a coho on its own — but when you set all the species of wild Alaskan salmon side by side, the coho shines bright like a diamond. Its flesh isn’t as deeply red as sockeye, but wild coho is still a robust red-orange.

When you take a closer look at what’s in sockeye and coho, this is where the two species diverge for you as the consumer.

Wild Alaskan sockeye’s striking red flesh is a reflection of its diet, one that’s high in nutritious algae and zooplankton — which include tiny crustaceans like krill — and gives it its signature color. Color isn’t just aesthetic here. It’s the direct result of an antioxidant compound called astaxanthin, a carotenoid that the salmon consume in their diet. Carotenoids are commonly found in red-orange foods like sweet potatoes, carrots, and squash. Whether these carotenoids are plant or fish based, the nutrition gets passed all the way up the food chain to us when we make them part of our meal.

In fact, all types of salmon get their pink-orange-red flesh because of this dietary component. Sockeye just happen to eat the most zooplankton of all: The redder the fillet of salmon, the more astaxanthin we’re eating. Coho, being a more subdued shade of red, contains about half as much astaxanthin than sockeye.

Both wild sockeye and coho are lean machines, with coho being the leaner of the two. A 6-ounce fillet of sockeye has about 15 grams of fat, while coho packs about 9 grams; both species are rich in anti-inflammatory omega-3 fatty acids that are prized by health nuts and underconsumed by the average person.

But while sockeye edges out coho in terms of its astaxanthin content, a fillet of coho has the highest content of EPA and DHA of all the wild Alaskan species, the omega-3 fatty acids that we are looking to consume when we buy something like fish oil supplements. EPA and DHA are especially important components of brain health, making them essential fats for us while we’re in the womb, developing into adults, and living out our best lives in our golden years. When you’re integrating coho into your diet, perhaps a few fillets each week, you’re getting your recommended dose of EPA and DHA from a delicious meal, not from a pill.

Other Types of Alaskan Salmon At a Glance

Coho and sockeye salmon are popular wild-caught species, but you might be wondering about other Pacific salmon you've come across in restaurants in grocery stores:

When Flavor Dictates What’s for Dinner (or Breakfast or Lunch…)

Sockeye salmon has a robust “salmon” flavor that makes it a great choice when you’re looking for it to stand out in especially bold preparations. There’s no chance that the sockeye will be overshadowed by something like a curry rub, a few minutes cooking on a charcoal grill, or a salty cure. Sockeye’s salmon-forward taste often makes it a sea-foodie’s first choice.

Coho is the milder of the two, making it a good “starter salmon” for picky seafood eaters. Though it has a stronger taste than a mild white fillet of cod, for example, It isn’t quite as gamey as sockeye. But even seafood aficionados will want coho in their kitchen, as its subtle salmon flavor takes well to gentler cooking methods and milder flavor profiles, recipes where the bold flavor of sockeye might throw off the balance of a perfectly delicate meal.

See how we make seafood shopping easier and more convenient. And if you're ready to start cooking, explore our blog for even more cooking tips, recipes and meal ideas.