Salmon Color Guide: Why Salmon Are Pink, Orange or Red

An Overview on How a Salmon's Diet Affects Its Color 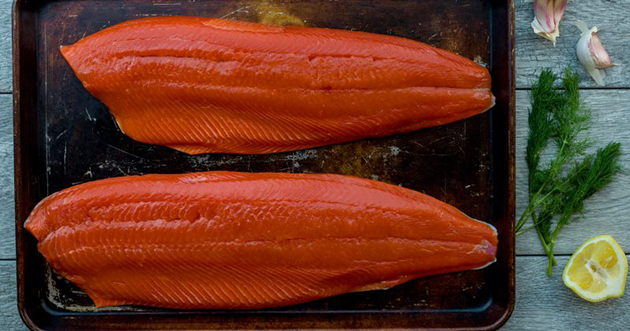 Have you ever heard that if you eat a bunch of carrots, you’ll turn orange? Salmon end up orange, pink or even red for the same exact reason: they consume carotenoids. In the wild, salmon regularly consume a diet rich in a carotenoid called astaxanthin, an antioxidant that has the power to brighten their flesh. Farmed salmon, in contrast, get their carotenoids from manmade pellets.

Wild Salmon Get Their Color From Eating Shrimp and Krill

In the wild, salmon get their characteristic hue from the creatures they eat, similar to flamingos. Even as eggs, salmon are pinkish to a reddish-orange. This unique "salmon pink" color reflects this carnivore’s diet of shrimp and krill. Each species of salmon eats a different proportion of these carotenoid-rich crustaceans, which influences how pink or red they become. For example, sockeye and coho salmon tend to be the deepest in color, while pink salmon is, pinker.

Then there’s the special case of king salmon, which can carry a recessive trait that leads to white or ivory flesh. In the past, fishermen and women used to stay away from this oddity, but white-fleshed, wild-caught king salmon is now considered more of a delicacy. Now, does it taste the same as its more colorful counterpart? That’s up for debate.

Farmed Salmon Are Pink Because of Color Added to Their Feed

Farmed salmon is generally on the pinker side, also because of its diet, but not for the same reasons. Without shrimp or krill, farmed salmon can't consume naturally-occurring carotenoids. Without carotenoids, their flesh would look grey or beige, not pink or red.

In order to produce a fish that resembles wild salmon, salmon farmers typically use corn and soy pellets that are supplemented with astaxanthin. Why bother taking this extra, costly step? Because it sells.

According to research conducted by DSM, a company that supplies dye to salmon farmers, different intensities of salmon dye appeal to different consumer bases. DSM even offers a “SalmoFan” to their clients — kind of like a paint wheel — to help salmon farmers determine how much pigment to use in their fish feed in order to achieve a certain shade of pink. Industry research conducted by a group of Norwegian academics shows that when offered the choice, consumers associate quality with color and would be willing to pay more for richer shades of pink.

If you’re curious, here are some tips on how to spot wild salmon vs. farmed, because seafood fraud in the U.S. is real.

Salmon Are What They Eat

So there you have it. Farmed or wild, a salmon’s color resembles what it eats. Shrimp and krill for wild and synthetic astaxanthin for farmed.

If you're ready to buy some of the best wild-caught, sustainably harvested salmon on the planet, click here!