A Delicate Method for Maximum Flavor 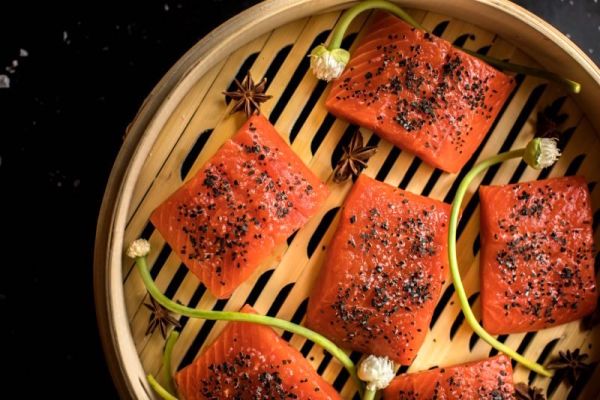 When the weather gets steamy, you’ll want to keep cool in the kitchen. Though it for sure sounds counterintuitive, steaming your wild-caught fish is a great way to make a hot meal without breaking too much of a sweat. That’s because as a cooking method, steaming cooks up any fillet of fish quickly and doesn’t require you to fuss over the stove the entire time.

And for what it’s worth, allow us to point out that steamed fish doesn’t have to be a strictly lean affair. While many people choose to steam their foods as a way to reduce their intake of fats, a perfectly steamed fillet is tender, moist and flaky. What’s not to love about that? Additionally, the virtues of this cooking method pair really nicely with creamy sauces, as you’ll see in some of the recipes below.

Here are 7 recipes that feature steamed fish to try out this summer.

Andrea Nguyen’s Vietnamese-style steamed salmon dish is coated with a sweet and savory oyster sauce and soy sauce glaze, then briefly simmered with garlic and ginger before getting steamed on a plate set within a bigger pot so that the plate collects all the juices that the salmon has been cooking in. Especially if you are steaming a thin fillet, you’ll want to check your fish around the 5-minute mark for doneness.

Soy-Ginger Cod (in 10 Minutes or Less)

For an even simpler steamed fish dish with high-intensity flavor, Martha Stewart’s recipe for cod is cooked directly in a shallow bath of soy sauce, rice vinegar and ginger. You’ll have this meal ready in 10 minutes or less, and all you have to do is slice up some scallions to toss on top of the fish when it’s finished cooking.

Halibut with Buttery Cabbage and Leeks

Food & Wine’s recipe for steamed halibut cooks them on a bed of cabbage and leeks softened in butter. It’s very easy to make: Other than doing some shredding and slicing, you’re basically just putting things into a pan and closing the lid, stirring the pans contents every now and then. Even the pickled cauliflower you’re garnishing the dish with is easy, since you’re just letting it do its thing in pickled ginger brine (the vinegar-based brine in store-bought jars of pickled ginger) for an hour before you start cooking the rest of the ingredients. It’s an ingenious way to use this brine, if you’ve ever wondered how to repurpose it.

Ideally cooked in a bamboo steamer, this recipe from The Splendid Table has you steaming salmon over sake simmered with aromatic ingredients like orange peel, lemongrass, star anise, and ginger. That in itself is enough to make a delicious meal, but you’ll want to make the “sake butter” that accompanies the fillets, a creamy beurre blanc made with a decent quality sake. Spoon this luxurious sauce over your fish shortly after you’ve made it, as the emulsion in a beurre blanc can separate if left for too long in a hot pan.

Another recipe that you’ll want a bamboo steamer for is this steamed halibut dish from Food Network. You can use cod in place of halibut if you like, or even salmon — though with salmon you’ll likely only need 4 or 5 minutes to cook the fish so that they’re tender and flaky. The fillets are served with an easy-to-make coconut sauce, infused with the flavors of lemongrass, chili, and a touch of fish sauce for that clutch note of umami.

This health-conscious recipe from Mark Hyman serves up steamed salmon with a garlicky cream sauce, also made with coconut milk. But instead of an Asian-inspired profile, the cream sauce has a Mediterranean flair with its capers and lemon.

For an especially fancy steamed salmon recipe, try this flower-studded one from The Los Angeles Times. The fillets of salmon are steamed over an aromatic broth of white wine, peppercorns, basil shallot and lemon. Separately, you’ll make a macerated, warm cherry tomato consomme herbed with sage flowers to serve with the steamed fish. For the final flourish, sprinkle on purple chive blossoms or another edible flower of your choice.