How to Pan Sear a Halibut Steak to Perfection 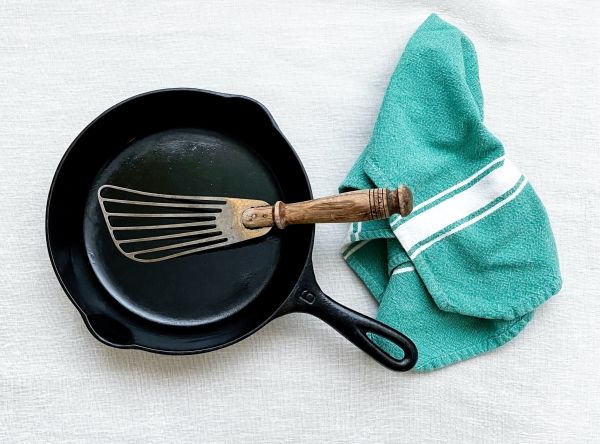 A hearty halibut steak, pan-seared to perfection, is our favorite kind of steak. After all, nothing sizzles and satisfies like a meaty steak cooked in a hot skillet.

The best part about pan-seared halibut steak is that it’s ready in well under 10 minutes, needing little more than some salt and pepper, making it quick and easy to treat yourself to glorious steak dinner.

If you have a steak cut from the tail of the halibut, the bone will probably be in the center of the portion. Steaks cut from the wider parts of the fish will have bones running along the edges, hidden under the skin. Leave these bones in, as there’s no reason to remove them now — once the steaks are cooked, the flesh can easily be pulled away from the bones.

However, we do suggest feeling out the steaks after you defrost them to get an idea of where the bones might be, since you won’t be able to visually locate them after they have been seared.

Heat up a cast iron pan or heavy-bottomed skillet over medium-high heat, adding enough cooking oil to just coat the bottom of the pan. Use an oil with a high smoke point — canola, peanut, or grapeseed oils are all good options. You want the pan nice and hot so that the steak will have enough time to develop a proper, golden sear in a relatively short period of time; this will make it less likely that the steak will be overcooked by the time both sides are seared.

Pat dry the halibut steak, removing as much excess water as you can with a tea towel or paper towel. This step is crucial in allowing you to get a proper sear on the surface of the steak. When you’re about ready to cook your fish, season each side with salt and pepper. Pro tip: Actually, if you have time, it’s nice to pat the steak dry about 30 minutes beforehand. Then, move the steak to the refrigerator, uncovered on a plate, so that the surface of the fish becomes even drier. Wait to season the halibut steak until just before cooking.

Once the oil shimmers and has just begun to smoke, carefully lower the steak into the pan and leave it be. The oil will likely spatter just a little bit — the drier the steak, the less it will spatter. Avoid covering with a lid, though, as this can actually trap moisture in the pan and lead to more issues later on.

Allow the halibut to sear for about 3 minutes on the first side. You’ll notice the edges of the skin just beginning to crisp up where it’s touching the pan, and the steak should have had enough time to develop a browned crust. Then, use a fish spatula to flip the steak; if you find it sticking to the pan a bit, just gently work your way underneath it.

The steak will need another 2 to 3 minutes on the other side, depending on the thickness of the cut. If you have an instant read thermometer, that will come in really handy here, allowing you to check the internal temperature of the steak around the 2-minute mark. Aim for 125 degrees here, since the steak will continue to cook for a bit after it’s off the heat.

If you don’t have a thermometer, just go ahead and use a fork to check on the flakiness. A thinner steak (between ¾ to 1 inch thickness) will take about 2 minutes on this final side to be cooked through, while anything that’s an inch or more thick will likely need a full 3 minutes. If you see the flakes beginning to separate on their own without your prodding, the steak is on the brink of being overcooked — try to get it off the pan before that point.

Transfer finished halibut steak to a plate, then top with a classic steak condiment that works well with a hearty variety of white fish: a pad of your favorite compound butter, or maybe even a heaping pile of sauteed mushrooms.