What Exactly Do Wild-Caught Fish Eat?

The Dietary Patterns of Some of Our Favorite Alaskan Species 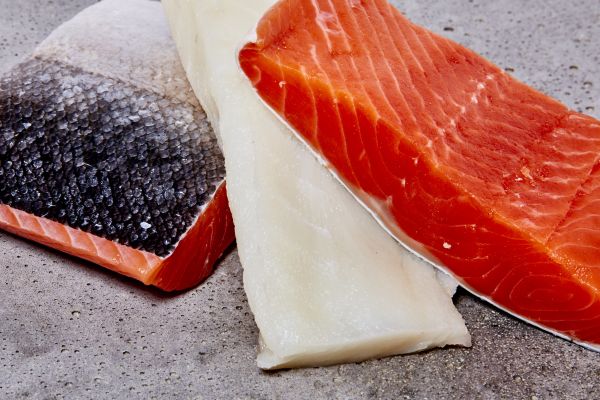 You are what you eat.

This maxim holds true all the way down the food chain: the fish we eat is only as delicious and nutritious as what the fish themselves are eating. Whether it’s salmon, halibut, spot prawns or any of the myriad wild Alaskan catch, each of these sea creatures is part of an interconnected web of prey and predators whose diets influence how they taste, and even how they look.

Here’s a run-down of what wild-caught Alaskan fish eat:

Before we can talk about the diets of wild fish, we’d be remiss if we skipped over plankton. Without plankton, the entire food chain would collapse.

Plankton are a broad category of tiny marine drifters that float near the surface of the water, in either freshwater or saltwater ecosystems. Plankton can be plants or animals: phytoplankton or zooplankton, respectively.

Phytoplankton refers to microscopic plant matter, predominantly single-celled algae, that get their energy from the sun — hence, their proximity to the surface, where they can bathe in the sun’s rays. Zooplankton is made up of creatures like krill, very small jellyfish, and larval fish and crabs.

Zooplankton hang out near the surface of the water to feed upon the phytoplankton floating all around them, loading up on this nutritious abundance. Through this diet, zooplankton become a rich source of the antioxidant astaxanthin, a vibrant carotenoid. Carotenoids, if you’ll recall, are commonly found in nutritious red-orange foods like carrots, sweet potatoes, squash — and, of course, wild Alaskan salmon.

Wild Alaskan salmon, being carnivores, are constantly on the hunt for a live meal.

Both sockeye and coho salmon feed on zooplankton and other manageably small meals like insects while they are young and still developing in freshwater. Once they’re big enough to head out to sea, their diet changes to reflect the new bounty that is available to them.

Sockeye expand their diet to include small fishes like herring, anchovies, and sardines, even eating spot prawns — food sources essential to their survival — while supplementing their diet with zooplankton. The fact that they continue to eat plenty of zooplankton throughout adulthood accounts for their rich, characteristically red hue.

Adult coho continue to eat zooplankton too, but being larger than sockeye, they are able to consume more small fish and are even big enough to eat juveniles of other species of salmon. While still nutritious and loaded with antioxidants, coho have a more modest astaxanthin content than their sockeye cousins; because of this, they tend to be a more subdued shade of red.

Larger than sockeye and coho, Pacific cod, halibut, and sablefish consume a diverse diet of fish and invertebrates. Sablefish, by the way, are sometimes called black cod, but aren’t actually related.

All three are bottom feeders, so they also feast on critters like spot prawns, scallops, and octopus. Full-grown halibut can get big — upwards of 8 feet long — so while they eat some of the same small fish as salmon, they also enjoy larger prey like pollock, cod, sablefish, and octopus. Sablefish are not quite as large, but are big enough to eat cod. Cod, just a bit bigger than salmon, are carnivorous predators that will eat just about anything food they can find, including the remains of dead creatures on the ocean floor.

Wild spot prawns like to scavenge for decaying bits too, but also consume small sea creatures as well as algae. Scallops, being bivalves, feed off plankton. Rockfish, the smallest species of fish we offer, live on small fish and krill, while the slightly larger pollock stick to small fish.

This would be a good time to reveal what farmed fish eat: man-made pellets that are designed for use in aquaculture. These pellets typically contain corn and soy-based derivatives that provide the calories that fish need to have energy, but not much else. It’s the same, misguided solution that is utilized in conventional agriculture — for example, giving cattle corn and soy-based feed rather than allowing them to graze on grass. Even more problematic, perhaps, is the fact that some of the species who are fed these plant-based pellets are exclusive carnivores, not vegetarians.

Beyond pellets, farmed fish are given antibiotics to fend off the diseases that thrive in their confined environments. In addition, salmon get fed either a naturally or petrochemically derived supplement of astaxanthin in order to account for the absence of zooplankton in their diets; without astaxanthin, farmed salmon fillets would be beige or grey, not pink or red. Even farmed shrimp get the astaxanthin treatment to make them appear more appealing.