Your Guide to Buying the Freshest Fish Every Time

It Starts by Understanding that Frozen Actually Means Fresh 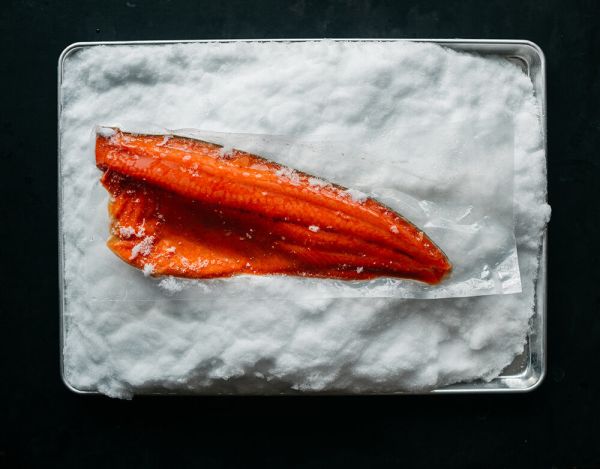 Knowing how to tell if fish is fresh is key when you’re a home cook — but first, it’s crucial to unpack what “fresh” really means. Because, believe it or not, when it comes to wild-caught seafood, frozen actually means fresh. That is to say, the best way to truly enjoy fresh seafood is right off the boat — BUT the next best way is eating seafood that has been frozen at the peak of its freshness.

If a fishmonger at a grocery counter insists that you’re looking at a piece of fresh salmon that has never been frozen, you should be very skeptical. Unless that fillet of “fresh” salmon was airlifted overnight from the fisherman, it ought to have been frozen shortly after being harvested from its waters to preserve it at its best quality.

The idea of “fresh” fish is sometimes used in contrast to the idea of “frozen.” But these concepts deserve a little demystification: frozen fish isn’t necessarily “not fresh,” and defrosted fish isn’t always fresh off the boat.

The reality is that you’re often much better off eating fish that has been frozen properly and handled efficiently than having the fish that you purchased “fresh” and not frozen.

Seeing fillets displayed on ice can give you the impression that this fish was recently caught, pulled just yesterday from the cold waters of the sea. Sometimes, this is the case, especially when seafood has been caught locally. But oftentimes fillets that are on display were delivered to your fishmonger frozen, then defrosted when needed to stock the display cases; this is especially true for any wild catch that has to travel more than a day to get to the market. Freezing fish after a harvest preserves the fish in the state in which it was frozen — it essentially stops the clock on the natural deterioration of the fish, locking in freshness. Thawing the fish restarts this clock, so the “fresh” fish at the counter is often not as fresh as frozen alternatives.

To be an even more informed consumer, you’ll ideally want to know how the fish was frozen in the first place. High-quality fish is flash-frozen shortly after being harvested from the sea so that its quality is literally frozen in place. In addition, the best catch is typically thawed only once or twice before it reaches you to allow the fish to be processed and packaged; lesser products can be thawed and refrozen several more times, a process that diminishes the fresh qualities of the fish.

What To Look For When Assessing Your Seafood

To ascertain if your thawed fillet is in the right condition for consumption, the best way to tell is through scent. With the exception of sablefish, which naturally has a stronger odor when raw, wild-caught seafood species that have been frozen at the peak of freshness should have minimal to no scent when raw.

Regardless of whether we’re talking about white fish or wild caught salmon, touching the fish can help you determine if it has begun to go bad.

When fish is fresh, the flesh will feel springy to the touch, bouncing back ever so slightly. The skin should also feel slippery, as if it has just been pulled from the sea; if it feels sticky, the fish has been sitting out for too long and is starting to turn.

Good fish will never emit fishy odors; instead, fresh fish has the clean, faintly briny scent of the sea. Fish gradually develop off-smells when naturally occurring compounds in the fish start to break down, so unpleasant aromas indicate that the fish is beginning to rot. Trust your nose on this one: If there’s a strong fishy smell or sour smell, it’s probably not going to smell appetizing to you.

You can also visually inspect the fish to get an idea of how fresh it is, though this can take a bit more practice if you’re not familiar with a particular catch. The skin should be shiny and bright; it dulls or develops a grey discoloration over time. White fish like cod, halibut, or wild Alaska pollock should be vibrantly white or ivory in color. For salmonids, you’ll want to know your species: The flesh of sockeye salmon is naturally a rich red-orange hue, while coho has more muted, pink tones and silvery, metallic skin.

Also, if you see any discolored liquids coming off the fish, it is most certainly bad.

How Long is Flash-Frozen Fish Actually Good For?

As soon as fish is caught, the clock starts ticking on freshness. While refrigeration can slow this clock down, freezing can practically stop the clock until it’s defrosted for consumption.

For the best quality (texture and flavor), frozen seafood is best used within two years. Thawed  seafood can usually be stored in the refrigerator for up to two days before it starts to go bad. However, it’s best to treat it as if it’s just been caught and consume it on the same day that it was thawed.

Home cooks who are using flash-frozen fish products should follow this rule: Cook fish the day it is defrosted in the refrigerator (or the day after, if you’ve defrosted it overnight). If that’s not possible, do your best to use it within a couple of days and inspect it before using to see if it is still in good condition, based on what you know about how it should smell, feel and look.

One major exception: If you’re quick-defrosting to thaw the seafood in a bowl of water rather than in the refrigerator, you’ll need to cook the fish immediately to ensure that it will be safe to eat.

As for cooked seafood, if it is stored properly in the refrigerator, it has a shelf life of three to four days, just like other animal-based proteins. Simply keep it cold and covered.

What Is the Best Way to Store Fish to Maintain Freshness?

How Do You Store Raw Fish in the Fridge?

The best way to store raw fish in the fridge is to pat the fish dry, place it in a zip top plastic bag — with the fish arranged in a single layer, so that you’re not trapping any moisture in between the portions — and sandwich this bag in between layers of ice. The ice keeps the fish extra cold, while the bag ensures that the fish isn’t sitting in liquid as the ice melts. Change out the ice as needed.

How Long Will Thawed Fish Last in the Refrigerator?

When stored properly, fish is still good for at least a day or two in the refrigerator. Beyond those first couple of days, you’ll want to inspect the fish before determining whether it’s still good to use.

Should I Freeze or Refrigerate Fish?

If your fish is currently frozen, leave it in the freezer until you’re getting ready to use it. If it’s been thawed, it’s best to leave it in a thawed state and consume it as soon as possible.

However, if you know you won’t be able to consume the fish before it starts to turn, it’s perfectly safe to refreeze it while it’s still fresh; since you likely don’t own a flash-freezing apparatus, the texture and taste of the fish is going to be affected negatively by this process, so we recommend you save this fish for something like stews or chowders.

What is the Correct Temperature for Storing Frozen Fish?

Your freezer should be set at 0 degrees Fahrenheit in order to store frozen fish safely, indefinitely.

How Fresh-Frozen Seafood Makes The Difference

By delivering seafood that has been flash-frozen at the peak of its quality, Wild Alaskan Company is able to offer you some of the freshest catch you can get, delivered right to your doorstep. Again, flash frozen simply means fish frozen quickly at the peak of its freshness. This is achieved by rapidly freezing food at low temperatures to prevent the formation of ice crystals and preserve quality. Basically, the slower seafood freezes, the larger the ice crystals that form between the fibers of the protein become, which can impact flavor and cause seafood to dry out.

So, flash freezing helps retain its flavor, texture and shape. In fact, a recent study even found that flash frozen seafood rated at the same quality or “significantly” better than store bought “fresh” fish (and many of our members would also agree).

And because the fish we offer is frozen very shortly after being caught, it’s as close as you’ll get to enjoying some salmon right after being pulled out of the water. When our seafood gets flash frozen at the peak of its quality, it locks in all of the nutrients, moisture and great taste. Minimizing the time between capture and freezing prevents the deterioration of quality that naturally begins the moment seafood hits the air.