‘Tis the Season: How to Make the Most of Spices on Seafood

Creating Depth of Flavor with Condiments 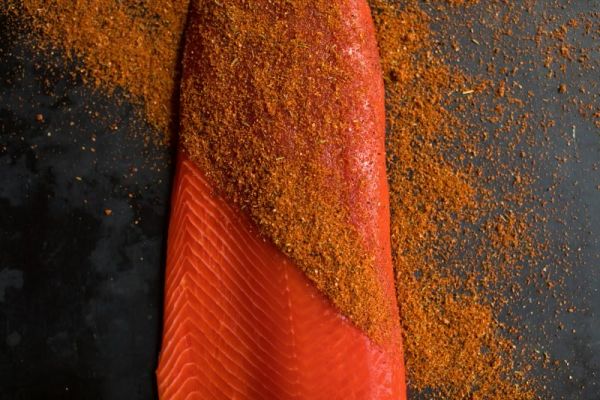 Using spices to season your wild-caught seafood is a foolproof way to add tons of flavor and variety into your recipe rotation. And it really doesn’t require you to have any crazy kitchen skills — the spices do practically all of the work, and all you need to decide is if you want to fry, sear, roast, poach or grill your seafood.

To get the most out of your spices when using them in your wild-caught seafood recipes, there are a few things you’ll want to consider that will elevate your meals.

For one thing, you should be buying spices in their whole, unground form when possible. Spices naturally lose their potency over time as their flavorful oils and components begin to dissipate or oxidize, and this happens more quickly when they have already been pulverized and released from their protective husks or shells. Having whole spices means you will want to invest in a spice grinder. A mortar and pestle can suffice, as well, though you won’t always be able to get as fine a grind.

In addition to staying fresher, another advantage of having whole spices is that they can easily be toasted as a way to play up their particular flavors and aromatic profiles. Add the whole spices to a dry pan over medium low heat and keep them moving in the pan — spices can go from toasted to burnt quickly, due to their volatile oil content — until they begin to release some of their aromas. Once they become fragrant, take them off the heat and transfer them to your spice grinder or mortar to break them down.

Two spices that you’ll probably be reaching for on a regular basis are cumin and coriander. They’re commonly used in a diverse range of culinary traditions that are characterized by their depth of spice, including those that we associate with the flavors of South Asia, the Middle East, North Africa, the Caribbean, and Mexico. Cumin and coriander are used in marinades, dry rubs, and as the spiced base of soups, stews, and curries. Jamie Oliver’s recipe for fish masala uses these two spices, in addition to turmeric — another that should be a staple in your pantry — to make an Indian-inspired paste to slather on your fillet of choice.

Paprika, whether sweet or smoked, is also a spice that will come in handy in a variety of recipes — this one you’ll buy ground already — as it is used in blackening mixes or batters to add a little kick. These beer-battered fish tacos from Food52 are made with a batter spiced with paprika, cumin, and coriander. Mild rockfish or our pollock quick cuts would be a great fish option to use for this recipe.

Ras el hanout, a North African spice blend, is made from more spices than you can count on both hands. Food Network’s recipe for pan-seared salmon is dusted with this mix before it hits the pan. While you probably will have make a run to the store, initially, to gather all the spices you need to make your own ras el hanout, you’ll be making enough to last you three months — and once you’ve put the spice blend together, it will become your go-to shortcut for nights when you need an effortless but satisfying meal.

Another quintessential spice blend is five spice powder, made from cloves, cinnamon, fennel, star anise, and Szechuan peppercorns. We recommend making your own batch of five spice powder to use in recipes like this one from Epicurious, which uses it to flavor a broth in which to poach and serve sablefish. In this case, the spice blend gives you a shortcut to making a low-maintenance yet complex-tasting soup. Consider playing around with five spice powder in stir-fries or even as part of a wet marinade to use while baking.

Hold the Salt (‘til Right Before Cooking)

Whether you’re using your own spice blend or a store-bought mix as a dry rub, note whether the blend already includes salt. Ideally, you don’t want to include salt in these blends so that you have better control of how you’re seasoning the overall dish. Note that you might find you need less salt when you’re using spices, since you won’t be relying on saltiness for flavor.

More importantly though, if a spice blend is salted, you won’t want to add it to your seafood until you’re about ready to cook because its salt content will begin to pull out some of the moisture from your seafood as it sits; this is the same thing that happens when you’re curing seafood in salt, by the way.

The only exception to this idea that salt dries out your food is when you’re salt-baking seafood like spot prawns. In this case, the salt actually keeps the prawns moist. And you’ll want to keep your spices handy, since they’ll act almost like culinary incense when pressed into a salt crust. This recipe from Vitaly Paley integrates whole cardamom pods, cinnamon sticks, star anise, and cloves into a salt crust that will steam your spot prawns to perfection.