Mastering the Simple Art of the Seafood Boil 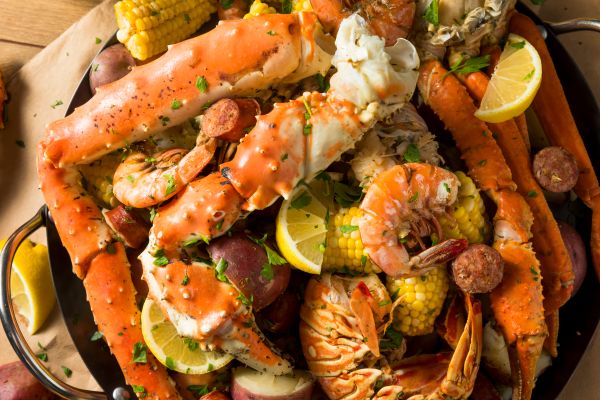 Does the idea of a spicy, smoky, steamy spread of wild-caught seafood make you salivate? Do you love deliciously messy meals where you can’t wait to dive in, where forks are optional (but napkins are an absolute necessity)? You’re going to want to gather your favorite shellfish and a few other tasty components for a seafood boil, the ultimate no-recipe recipe.

What Is a Seafood Boil?

In case you’ve never had the pleasure of enjoying a seafood boil before, it’s the culinary culmination of boiling a mix of shellfish in a zesty bath of spices. If you’re from Nola, you’d use Zatarain’s and add a ton of cayenne pepper to make sure things are especially spicy; a low country boil, on the other hand, is a little more judicious when it comes to heat but otherwise has a similar flavor profile that usually consists of bay leaf, mustard, coriander, allspice and dill.

Typically, seafood boils contain one or more varieties of shellfish, like crab, shrimp, or a particularly regional crustacean like crawfish. In addition, there’s usually potatoes, corn on the cob and smoked sausage. And of course, most importantly, there’s enough spice mix to flavor a big pot of water in order to create a delicious hot tub in which you’ll layer in all of these ingredients. Everything cooks together, but each ingredient is added to the pot at different points in time so that nothing is undercooked or overcooked when all is said and done.

Once everything is perfectly cooked through, you’ll toss the cooking liquid and dump the boiled morsels of deliciousness onto a large tray or outdoor table lined with paper (newspaper or brown paper bags will do just fine) — you can use plates if you must to portion things out individually, though the traditional seafood boil is communal in nature. Once everything is laid out in all its steaming, aromatic glory, everyone at the table digs straight in with their bare hands to enjoy the meal.

How to Make a Seafood Boil

Whether you prefer something more mild or are a sucker for meals that make you sweat it out, whether you use one type of shellfish or a few, the two most important elements of a seafood boil are the seasoning and the timing.

If you like, you can make your own seafood boil spice mix, using one of the countless recipes out there on the web. However, you might actually prefer to stick to the culinarily modern tradition of boils by using a premade mix like Zatarain’s or even Old Bay, even if you’re a home cook that usually likes making everything from scratch. Try each approach out to see what you prefer.

Regardless of which seasoning mix you choose to use, the key to proper seasoning is to use enough of this mix in your pot of water to create a very salty solution. You’re not making a stock or broth here; rather, it’s more like salting water for pasta. You want the water to be salty like the sea.

As for your ingredients? Think about using a mix of Dungeness and snow crab legs for a sweet and briny boil. The more the merrier if you have some spot prawns in your kitchen, too, which are the perfect meaty size for this dish. (P.S., leave the shells on.)

Small, waxy potatoes are also a must-have element of the boil; if you have medium-sized potatoes, just cut them in half into large chunks. Sweet corn, left on the cob but cut into more manageable pieces — cut your cobs into halves or thirds — are also essential to the boil. If you’re a meat eater, you may want to include a smoked sausage like andouille (a classic choice) or kielbasa; an unsmoked sausage is fine too, as long as it’s already cooked. Cut it up into pieces that you’ll want to pick up with your fingers.

As for the proportions of your ingredients, just eyeball them. How many handfuls of each item do you think you’ll want each person to have? Keep in mind that 2 or 3 Dungeness legs and claws, or 5 snow crab legs and claws, yields about ⅓ to ½ cup (a couple ounces) of crab meat.

Fill up a big pot about ⅔ or ¾ of the way with water. You want enough in there to fully submerge your boil ingredients, but not so much that the pot will overflow once it’s loaded up with all the goods. Bring the water to a chill boil (think vigorous simmer), mix in your spices, then let the spices open up for 10 minutes or so. If you like, you can add in some celery sticks, quartered onions, peeled garlic, and an extra teaspoon of cayenne here to fill out and fire up the boil.

Next, you’ll need to start layering in your ingredients in the proper order. Potatoes take the longest to cook, so those go in first. You want them just cooked enough that you can stick a knife into them with little resistance. Check on them at the 6-minute mark to see if they’re about there or if they need more time. Once they’re just barely tender, add in your corn cobs and sausage and simmer for another 6 minutes or so.

Finally, bring your boil to a full on rolling boil, then add your shellfish to the pot — thawed crab legs and spot prawns (if you’re using them), keeping in mind that they are already pre-cooked, so they won't need too much time in the pot. Turn off the heat, then allow everything to soak for 3 minutes or until your spot prawns just turn pink.

Drain out the liquid, dump or dish out the boil contents however you choose, then serve with lemon wedges, a bottle of hot sauce, an extra sprinkle of Old Bay, and get cracking!