How to Adapt Salmon Recipes 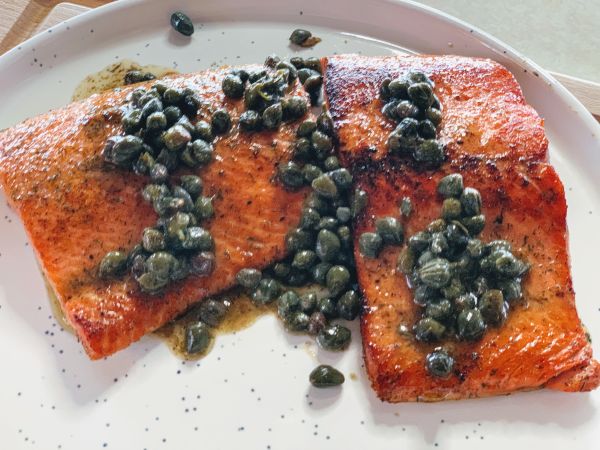 There are thousands of salmon recipes available to you in cookbooks, on cooking shows, and through foodie blogs, tempting you to choose just one to make for your next meal. But sometimes, you won’t have exactly the right fillet on hand to make the recipe as it’s written.

That doesn’t mean you have to look for the perfect recipe — you’ll just have to know how to fine-tune the recipe you’re using to match what you’ve got in your kitchen. Whether your fish isn’t the right variety or the right cut of salmon, here are some easy ways to adapt salmon recipes to be made with wild-caught, individually portioned cuts.

From Farmed to Wild

Perhaps the most common reason why you’ll want to adapt your recipes is because you’re using wild-caught salmon.

You can assume that if a recipe doesn’t specify that you use a wild variety like sockeye or coho, it’s been tailored to farmed salmon. Farmed salmon has been the conventional choice for fishmongers and consumers for the past few decades, so recipes from mainstream food publications have been written with that in mind. That, of course, has been changing as consumers are becoming more informed about the ways that wild-caught salmon species support a balanced ecosystem, a sustainable fishing industry, and the health of consumers.

If your recipe was written for farmed salmon, this will have significant implications on the cook time of your dish since wild salmon species are much leaner than their farmed counterparts. As a result, wild salmon cooks much more quickly and will be dry by the time your recipe directs you to pull it from the oven or pan.

To adapt any recipe that isn’t written specifically for wild salmon, as a general rule of thumb, you should expect that your fillet salmon will be cooked in about ¾ of the total cook time — and in most cases, this is a straightforward adaptation. If the recipe has you baking your fillets for 20 minutes, check on it around the 15 minute mark. If you’re directed to poach a fillet for 8 minutes, it may only need 6 minutes before it’s perfectly tender.

When you’re following a conventional recipe for pan-seared or grilled salmon though, if your goal is to achieve crispy skin, you’ll want to make sure you’re giving your salmon skin ample time on the heat while cutting down the total cook time. To do this, simply leave the skin-side of the fillet down until it’s done, then flip the fish to finish it for the remainder of the reduced cooking time.

For example, if you are directed to pan-sear a fillet for 3-4 minutes per side — for what would be a total of 6-8 minutes for farmed salmon — you’ll want to bring the total cook time down to 4-6 minutes. However, disregard the “per side” direction and leave your wild fillet skin-side down on the pan until it’s crispy (probably 3 or 4 minutes), then flip it so that it’s flesh side down for just another minute or so.

Adapting for Specific Cuts of Salmon

If a recipe calls for center-cut fillets, can you use our Captain’s Cuts? Can you use individual fillets for that recipe you’ve been obsessing over, even though it’s for a whole side of salmon? The short answer is yes. You’ll just have to adapt the cook time so that it suits your cut.

When a recipe calls for center-cut fillets, it’s simply trying to make it easier for you to know when your salmon is done since the portions you’re making in your own kitchen will be relatively uniform in thickness, rather than a mix of center and tail ends. Additionally, the authors developed the recipe to correspond to this thicker, center cut of fish, so it makes it more likely that the cook time of the recipe is accurate. But there’s no reason to go out of your way to use center cuts. If you’re using tail pieces, just reduce the cook time a bit to account for the thinner size of your fillets.

Similarly, whenever you’re using Captain’s Cuts for any recipe that calls for individually portioned fillets, know that they’re going to cook up super fast. In most cases, you’ll want to cut the recipe’s cook time by half, at least.

As for recipes written for sides of salmon rather than individual portions — you’ll usually be roasting or broiling whole sides, for these recipes — plan to reduce the total cook time by just a few minutes. Since 6 oz. fillets are less massive than 16 oz. or bigger sides, and also have more surface area, they’ll be done sooner than your recipe suggests, regardless of if it’s written for wild or farmed salmon.