9 Cooking Ideas that Include Frozen Veggies and Seafood

Making Culinary Magic with Ingredients from the Freezer 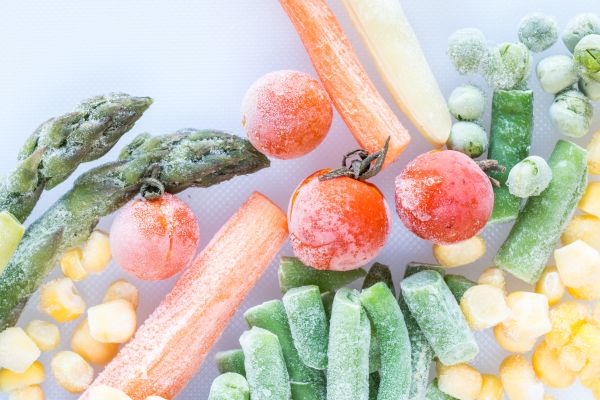 Frozen vegetables can get a bad rap, but there are plenty of produce options out there that freeze well. In fact, like wild-caught seafood, frozen vegetables are typically of better quality than the veggies you buy in the produce section of your grocery store, as they are preserved shortly after being harvested, at the peak of freshness.

You probably have a bag of something frozen in your freezer right now that would be a great sidekick to wild-caught seafood. Match up what you have on hand with a recipe from our list below for a meal that will put your frozen veggies to work.

This hearty salmon chowder from Food & Wine will put both frozen corn and frozen lima beans to use. Using lots of corn will add a creamy sweetness to the chowder, allowing you to cut back on the dairy a bit, while the nutrition-dense lima beans add heft; if you don’t have lima beans, you can add in something like peas instead. As for the salmon, you can follow the recipe as written, or flake in leftover salmon (or even white-fleshed fish) for the final step, stirring into the chowder just to warm the fish through.

This recipe from Aida Mollencamp also utilizes frozen corn and lima beans, as well as black eyed peas if you have them, to make a summery succotash that can accompany a fillet of grilled halibut any time of year; the halibut can easily be grilled indoors on a cast-iron grill pan, if it’s not exactly cookout weather. To top everything off, serve with a pad of orange-parsley compound butter.

Serious Eats’ recipe for fish is served with petits pois à la française. Translation: this French-inspired dish is sort of like a warm salad of lettuce and peas cooked in pancetta, topped with a fillet of pan-seared cod. Frozen peas will shave a few minutes off the total cook time, as they’re already blanched and ready to eat after a couple minutes in a hot pan.

Martha Stewart’s recipe for wild salmon, served with peas and a mustard beurre blanc, is the epitome of elegance. If you’ve never made a beurre blanc before, don’t fret: it’s quite easy, simply requiring you to whisk butter into a pan of warm vinegar, wine and shallots. By the way, if you don’t happen to have a bottle of champagne vinegar in your pantry like Martha does, you can substitute rice wine vinegar instead.

Frozen spinach gets jazzed up with some East Asian pantry essentials, like soy sauce, sesame oil, and toasted sesame seeds. This humble preparation of greens becomes the main flavor component of The Kitchn’s recipe for a seafood grain bowl, full of nutty farro, crispy salmon fillets, and a bit of butter to add some richness.

Another recipe featuring frozen spinach, Food Network’s salmon florentine adorns the fillets with a garlicky mixture of spinach and ricotta. This topping will actually help prevent your fillets from overcooking as they bake in the oven, though we recommend checking the fillets at the 10 minute mark rather than waiting the full 15 that the recipe calls for.

Nigella Lawson’s recipe for fried white fish (try using cod or halibut) is served with a broccoli puree, made from frozen broccoli florets blended together with coconut oil. This ridiculously healthy green puree is a delicious, textural contrast to the fillets, which are dredged in a ginger and paprika spiced flour so that they’re nice and crispy by the time they’re done.

For a filling, keto-friendly, low-carb meal, check out Food Network’s grilled salmon recipe. The fillet of salmon is stuffed with fresh herbs (you’ll make slits in the flesh to create pockets), then basted in a honey-soy glaze and served with edamame, giving this dish a slight Asian fusion flair. The recipe doesn’t specifically call for frozen edamame; instead, it calls for already cooked beans, so just follow the cooking directions that come on the package. If you don’t have access to a grill, it’s totally fine to use your broiler, though basting your fillets will be a little more finicky of a process.

BBC Good Food’s recipe for a Goan-style fish curry with green beans is a great go-to meal when the cupboards are a bit bare. You’ll of course need to have a couple fillets of white fish ready to use — actually, pollock quick cuts would be an easy choice, as the fish is already processed into bite-sized morsels. Beyond that, all you need is a bag of green beans, a can of coconut milk, some bouillon, curry paste, and onions to throw together a bare bones yet tasty seafood meal. Serve with rice or something else that can help you sop up the sauce.